I did not write too much about the trip itself and other events, I concentrated only on the race,  and this is the text about how it’s looks like!

The day of the Race, Friday 31/08/2018 rain,  winds, clouds and message from the organizers to expect cold and bad weather and we need to bring extra warm clothes, which naturally additionally aggravates our already heavy backpacks.

Start of the race at 18:00 and I was already at the start line 16:00 because I did not want to waste time in the caose of the other runners who want to get a better position in the first 8km. As I was already among the first at the start, I had the opportunity to be close to the elite runners that came about a half an hour before the start. It’s enough to be motivated to stand side by side with the best trail runners, (but racing with them is quite another story you can read below J)
The race started and everyone rushed as if we were racing to 10km and not to 170km.I decided to run for a feeling, without an hour and a look at which pace I run.I managed to save the cold head and not run into the first km, so I reached the 468th position after the first checkpoint.I slightly compared the feelings of 2015 and now, I was much more calmer, I knew about my possibilities and at the same time I was apprehensive of injury or stomach problems, which is not unusual for such kind of races
The climb to Le Delevret and descent to Saint Gervais passed very quickly. At control points, I prepared myself not to waste a lot of time, so through Saint Gervais I just frolicked. Here at the check point were my wife and children which came to see me, my wife’s syster Olivera and Laurie her husband. Rain was constantly falling at the beginning of the evening, so I only saw the path and the river of head lamps that move along the winding paths
I controlled my time in a race at the control point Les Contamines and for just  4 hours I was ran 31km,  and I have to admit that the first 31km was a good running track. Next control is at 39km La Balma, from where we climb to the first summit of 2500 altitudes. Learned from the past races, I tried to keep myself as short as possible on tops and high altitudes, so I ran to the next control at Les Chapieux as quickly as I could.
Now when I look at the results and my passing times, I see that I actually progressed very well, and then it seemed to me that thousands of runners were in front of me, only the lamps glimmered for miles ahead of me. As I passed the control point Lac Combal after 64km and 9h30min in the race, I reached an enviable 161th place (which means I crossed 300 runners from the 20th to the 64th km) I never dreamed that I would make such a good progress first part, I got a lot of time because I did not stay on checkpoints. The night was in my taste, ideal for running, and I thought I just ran, ate and drank.
The next control was Courmayeur 77km where we had our spare bags with things we had previously packed and surrendered to the organizer before the start. Since since the start of me all of the equipment suited and I did not have any problems, so I did not even change anything except a shrouded shirt, supplemented food supplies and continued on. In this way, I kept trying to keep myself warm and not waste additional energy to get warm and back in the race.
I think that I made my biggest mistake in the race precisely on that control, because I gazed that I did not waste a lot of time and I did not eat anything serious except soup and my stomach received food without any problems. In the second part of the race was the other way around, I knew I had to eat, and I had no appetite. So I went through the whole race with soup, gels, chocolates and carbohydrate drinks.
A steep climb of 4km to the Refuge Bertone passed through the dawn of dawn and very beautiful scenes to the surrounding mountains. I felt a sense of fatigue in my legs, but I could still run at a slow pace without any major problems, so I passed that part to the Arnouvaz control point where a few runners overtook me for the first time in the race. I used Arnouvaz’s refreshing station to take a little rest and prepare for the climb to the highest point of the race Grand Col Ferret. 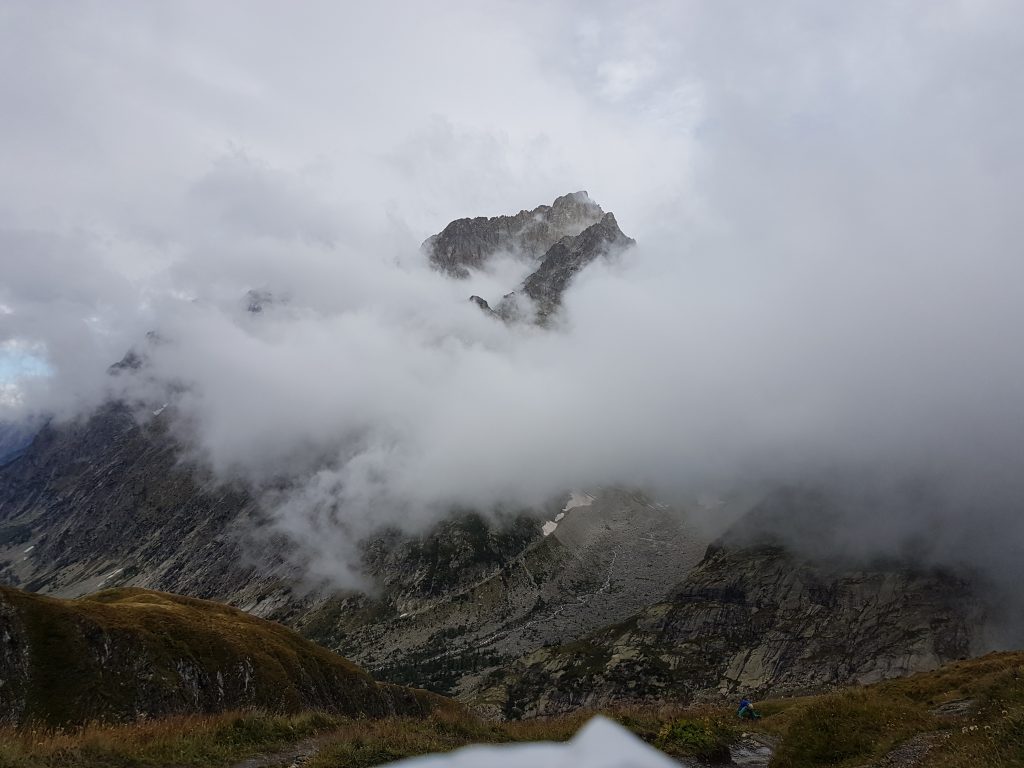 This ascent made me feel like eternity, and the strength of my legs was losing, but I had no other option than to continue to move because it was a strong wind and a low temp … of air so that any stopping means hypotermia in a very short time. The downhils are my better side, so I was looking forward to crossing the top of the Grand Col Ferret and to come to downhill 20 km long where I got on time and in general placement.

Through the control point of La Fouly I just fled and continued on to Champex-Lac where I had planned to rest a bit. I remember the words of Simun Cimerman (the organizer of the Velebit Ultra Trail race) from 2015 … when he mentioned that the race starts at 130 km and I have to admit that he was right. Although it was difficult and pain in the legs, the legs were getting bigger, but I managed to keep a good pace. With the arrival at the control point of Trient at 139 km after 23:00 in the race I reached the 105th position, which eventually turned out to be my best placement during the entire race.
My wife, children, Oliver and Laurie came to Trient control, which I already mentioned in the above text. It was nice to get help on everything I needed and here I got help fixing the zulos because it was painful to run downhill. There I lost about 40 minutes at rest and a bit of power for the next 10 km through the Catogna passage until the next control of Vallorcine where my family once again came to see me and helped with everything. In this section, the same thing, I could barely climb and then I increase the pace to compensate for the time I lost on uphill.

At La Flegere I climbed with the last power atoms, I knew there is still a little bit left and I no longer have energy to save, so I did my best. I saw that this year I will not be able to reach the goal for 30 hours, so I sat in the tent for a while, ate and drank something and then ran into goal in Chamonix.

The descent passed in the dark and with few runners, on the track I have passed only three runners for the past 8 km. At the entrance to Chamonix I was surprised by friends / runners from Sweden who ran the TDS competition (thanks guys). My wife, kids, Olivera and Laurie were main characters for welcome, they were also tired of my adventure around Mont Blanc and you can imagine what I was if they were visibly tired 🙂

A little about the equipment and food I used during the race: